Northumberland National Park Authority is supporting a nationwide campaign aimed at raising the public awareness of light pollution in a bid to conserve our region’s starry dark skies. 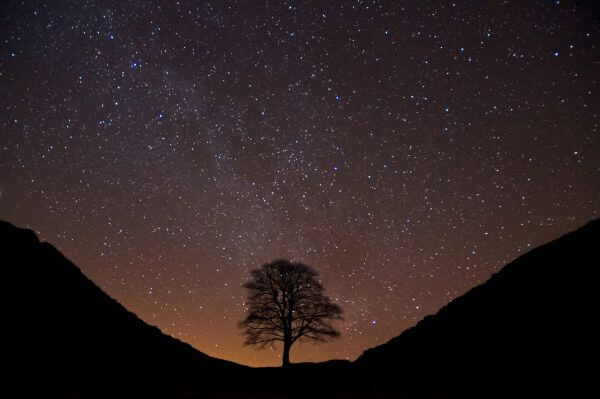 The ‘Big Dipper’ campaign, which officially launches this month, is the brainchild of the Dark Sky Alliance, a national group made up of conservationists, astronomers and tourist operators, including a number of National Parks, who all have an interest in protecting our night skies from excess light pollution.

Many outside lights, especially LED floodlights and security lights, can be too bright and are installed in such a way that much of the light is directed up into the night sky, contributing to the orangey-white sky glow above our towns and cities, which spreads out into the countryside.

With the dark nights drawing in, the campaign aims to encourage property owners with outside lighting to assess how much lighting they have and to ensure where possible that lamps are dipped downwards.

The move is backed by Sir Martin Rees, Astronomer Royal, who said:

“It’s important that efforts are sustained to cut light pollution further so we can all marvel at the night sky wherever we may live. This campaign deserves wide support.”

Northumberland National Park has been hailed as “one of the best places in England” to enjoy the beauty of the night sky.

Designated in 2013, the gold tier Northumberland International Dark Sky Park covers 572 square miles of the North East, including almost all of the National Park, making it Europe’s largest area of protected night sky.

“The Big Dipper campaign aims to celebrate our pristine skies by raising their profile and making people aware of the part they can play, no matter how small, to help conserve them.

“In recent years, there has been a significant increase the use of LED flood lighting being installed on the sides of houses, barns and industrial buildings, right across the Northumberland International Dark Sky Park, as well as in other rural areas.

“Many of these LED lights, especially those installed incorrectly can emit an intense white/blue light which ruins our view of the heavens. Through the Big Dipper campaign, we are asking people to ensure that the lights around their homes point down and are fully shielded, only illuminate the areas they need to and aren’t used excessively, employ lighting that is no brighter than necessary and if possible, don’t use bulbs which emit white/blue light, but rather warmer colours to help minimise glare which affects not only our night skies, but also the wildlife we share our beautiful region with.”

To help landowners in and around the Northumberland International Dark Sky Park to convert to dark sky-friendly lighting in line with the campaign, for a limited time, Northumberland National Park is offering grants through its Small Grants Fund to businesses to cover the cost of replacing their existing outdoor floodlights with shielded ambient lighting.

“Offering grant funding toward the cost of installing dark sky friendly lighting to businesses in and close to the National Park is a positive and proactive step that we can take to help businesses minimise light pollution and help maintain our magnificent dark skies.”

“Our outstanding night skies are of vital importance to the Northumberland tourism industry at this time of year,” Duncan added.

“Through the Big Dipper campaign and our subsequent grant funding, we hope to help as many people as possible to visit our region to enjoy our dark skies, for many years to come.”

Northumberland National Park is hosting a number of dark skies events as part of its winter event programme. Starting with a ‘Family Astronomy’ event at The Sill: National Landscape Discovery Centre on Saturday 6 October and running through until the end of March 2019, the programme includes stargazing events, astrophotography courses, meteor shower watches and much more.

Car parking, pay before you arrive

If you would prefer to pay for your car parking before arriving at one of our waterside parks or reservoirs click below:

Get the latest Updates!
Follow us on social media

Join the conversation and follow us on our social
accounts below:

Get our latest events updates and news straight to your inbox.